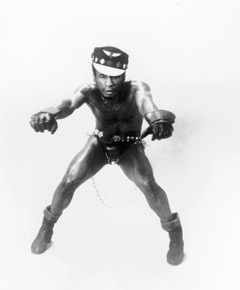 Choreography on Other Companies

Early in 1991, as adjunct professor of dance at Hofstra University, Mr. Pomare created a new work called "Epitasis" on the graduating class in the dance department.  Since that time the work has been performed by several companies including a critically acclaimed performance by the Eleo Pomare Dance Company.   He again served as adjunct professor in the dance department at Hofstra University through the Spring, 2000 term.

Three of Mr. Pomare's outstanding works have been reconstructed to document them as classics of "The Black Tradition in American Modern Dance," a project of the American Dance Festival supported by a grant from The Ford Foundation.  They include: "Las Desenamoradas" a work inspired by Garcia Lorca's "The House of Bernarda Alba;" "Blues for the Jungle" a work first choreographed in Europe about 1962 under the title "Harlem Moods;” and "Missa Luba" a dance pageant set to a Congolese version of the Catholic Mass.  "Las Desenamoradas" was performed in1988 and again in June of 2008 at the American Dance Festival at Duke University,  "Blues for the Jungle" in 1989, and  "Missa Luba" in the summer of 1990.

Mr. Pomare's "Hex" was chosen to appear on the Alvin Ailey Repertory Ensemble's Spring, 1994 season.   "Plague" appeared on the 1995 and again on 1996 season of the same company.   Mr. Pomare was invited to Adelaide, Australia as guest choreographer for the 1994 Spring term at Adelaide's Centre for the Performing Arts.  There he choreographed a major new work entitled, "A Horse Named Dancer."  He returned to Australia in the Fall of 1995 as the featured teacher and choreographer at the Mirramu Dance Festival near Canberra.    Alpha Omega Theatrical Dance Company is presenting Mr. Pomare’s work, “Narcissus Rising,” performed for the first time by a female dancer on its Spring, 2001 concert series.  “Las Desenamoradas” was also shown on the Spring 2001 dance program at John Dewey High School in Brooklyn.

In the Spring of 2002, the John Dewey High School Dance Ensemble students presented their own choreographic works created under the mentorship of Mr. Pomare. In 2002 Mr. Pomare lectured, conducted workshops, dance classes, and mounted new works on students at Howard University, Florida A&M University, the Ailey School, and for the Cleo Parker Robinson Dance Company.

Eleo Pomare’s “Back to Bach” was performed by Philadanco on the program of their season at the Kimmel Center in Philadelphia, November 20-22, 2003 and at New York’s Joyce Theater, Spring, 2004.

In the Fall of 2004 Mr. Pomare was commissioned to create a work honoring Taiwan’s national hero, Nylon Cheng, on the Grace Hsiao Dance Theatre. The company then toured Taiwan presenting the new work as well as other Pomare works.

In 2005 Mr. Pomare worked with young dancers at Dance Immersion of Toronto, Canada on a new work about Caribbean immigration to North American cities. 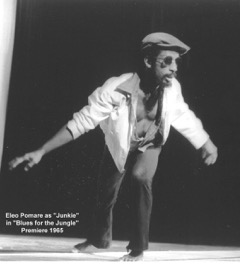 Mr. Pomare was a frequent lecturer on modern dance, black artists and their artistic heritage including lectures at the Alvin Ailey International Student Exchange, New York Public Library, Tisch School for the Arts (New York University) and Young Audiences.  He has also lectured at the Brooklyn Museum, the Schomburg Library, and at numerous colleges and universities.

Mr. Pomare was among the featured artists on PBS-TV’s “Free to Dance” which premiered on Channel 13 on June 24, 2001.

In November 2003, Mr. Pomare was a keynote speaker at the AfriCan Dance Conference in Toronto, Canada.

Two of his works, “Hex” and “Roots” were performed at a symposium sponsored by the French Ministry of Culture in Paris in April of 2009.

In addition to a John Hay Whitney Fellowship, Mr. Pomare is a Guggenheim Fellow.  He is the recipient of numerous other awards acknowledging excellence in his art.

Presented with the Key to the City of Messina, Italy, 1986.

The New Voices of Harlem  award for Artistic Achievement, 1988

The International Conference of Blacks in Dance Outstanding Achievements in Dance Award, 1994.

Award of Appreciation for Professional Contribution to the John Dewey H.S., Brooklyn, NY, 1999.

Certificate of Recognition for Achievement and Contribution, presented by the American Museum of Natural History, February 2001.

International Association of Blacks in Dance Award for Artistry and Contributions to Black Dance, January 26, 2002.

In 2007 Mr. Pomare was interviewed and entered into the archives of the HistoryMakers. His biography now appears with HistoryMakers, a video oral history archive on the WorldWideWeb.

The TOR Award for Direction and Choreography.

The AUDELCO 1983-84 nomination for Excellence in Choreography for  "Destiny in My Hands".

The AUDELCO 1983-84 nomination for Excellence for Director/Musical Production for "Destiny in My Hands".

Artistic Director and President of Board of Directors, Eleo Pomare Dance Company  (1958-2008)